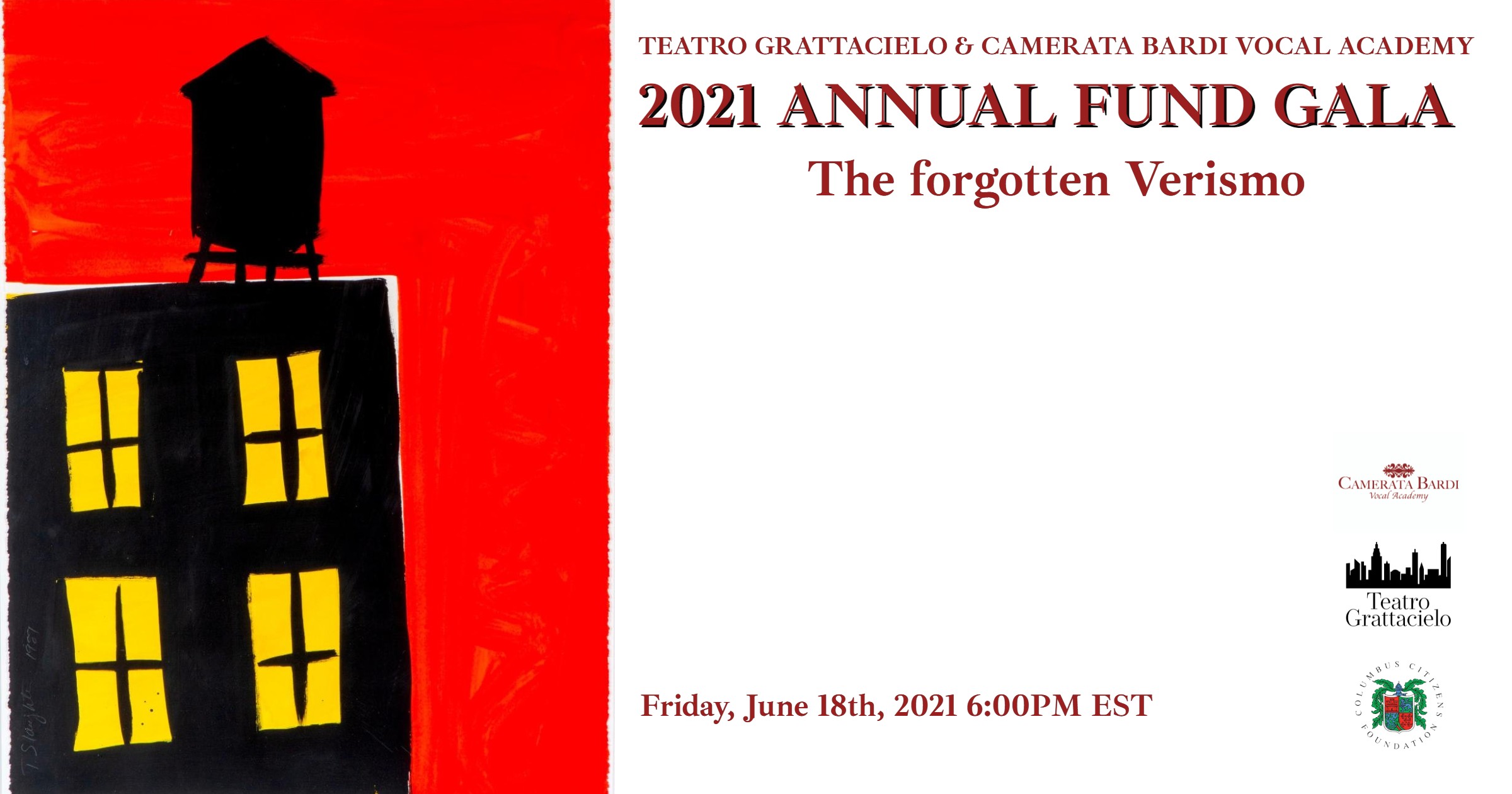 he young artists of Teatro Grattacielo, along with special guest star the inimitable Karen Slack, showcased rare gems of verismo arias and art songs at the company’s 2021 Annual Fund Gala presented in collaboration with Camerata Bardi Vocal Academy. Teatro Grattacielo held the gala at the opulent Columbus Citizens Foundation in New York City on Friday evening, June 18. The gala was filmed in front of an invited audience and live-streamed to those around the world.

In keeping with Teatro Grattacielo’s ambition of presenting works not regularly heard in the United States, the gala’s program comprised arias by the noted pioneers of the verismo period, Leoncavallo and Mascagni, as well as lesser-known composers Alfano, Zandonai, Giordano, Tedesco, and Pizzetti. Unfortunately, these composers’ works do not appear more often on stages or concert programs, as I found them accessible, musically satisfying, and dramatically rich.

It was, therefore, delightful to hear 10 young artists, along with Slack, sing pieces from Mascagni’s “Iris,” “Lodoletta,” and “L’Amico Fritz,” Leoncavallo’s “Zaza,” and Alfano’s “Risurrezione,” along with art songs by Tedesco and Pizzetti. The sole non-Italian piece on the program was Spyros Samaras’ “Dieu faites” from “Mademoiselle de Belle.” Samaras, whose best-known work is the Olympic Hymn, wrote opera hits during his time and paved the way for giants such as Puccini. Though the composer was Greek and the text in French, Teatro Grattacielo rightfully included his work.

It might seem a tad unfair to place emerging artists alongside an international star such as Karen Slack. The soprano’s most recent appearance at the Metropolitan Opera was Serena in Gershwin’s “Porgy and Bess” (2019). Having Slack as a guest star surely produced some nerves among the vocalists, but her spirit and warmth could not have been more inspiring or reassuring.

While it’s difficult for a musically informed mind not to compare the sound of a well-established artist to that of vocalists growing in their profession, Slack’s presence added to, rather than detracted from, the many excellent performances by the up-and-comers.

Along with several young artists, Slack showed how crucial stage presence is and how a 360-degree approach to recital performance—solid technique, strong presence, and an ability to represent the text visually—opens the emotional door to the full force of the text and music. This is not easy for young vocalists because it requires the already vulnerable artist to climb further out on a limb. While I heard wonderful technique throughout the evening, the outstanding performances came from those who put themselves all the way out there by stepping away from the piano and into the character they represented.

Slack’s emotion-filled performance at the gala was full of power and a sonority that brings about the wonderful ringing in the listener’s head. This was on particular display in the last piece of the evening, a more well-known work by Umberto Giordano, “La mamma morta.” In this gut-wrenching aria from the French Revolution-based story of “Andrea Chénier,” the heroine Maddalena tells servant turned sans-culotte Gérard how utterly miserable she’s been since the death of her mother at the hands of revolutionaries. The hauntingly beautiful piece contains all the ingredients of the verismo style, blending conversational, melodic, and declamatory aspects as it moves from one to the other on its tragic course. And what is verismo, if not devastatingly tragic in the main? Slack didn’t hold back, giving an object lesson in vocal and acting technique to the audience and the artists watching her.

A wonderful example of the same approach came from mezzo-soprano Eugenia Forteza, whose acting ability I have praised before and has only grown stronger since I last reviewed her in 2019. For the gala, Forteza sang “Oh, pallida,” from Mascagni’s “L’Amico Fritz,” during which she thoroughly channeled Beppe, Fritz’s gypsy violinist sidekick. Beppe is a trouser role in the spirit of Cherubino (though with far less stage time), and Forteza brought the energy of the character into the open through her compelling vocal and physical expression. Teatro Grattacielo will be presenting the “L’Amico Fritz” later this fall.

While Forteza and Kim stood out among the emerging artists on the program, all had solid outings. None of what Grattacielo had on the menu was familiar fare, so besides performing with a big-name singer, each took on the unfamiliar and presented works in front of a live audience for the first time since the beginning of the pandemic.

Soprano Clara Lisle sang the only non-Italian work of the evening, performing Spyros Samaras’ “Dieu faites” from “Mademoiselle de Belle,” his 1905 French-language opera based on Alexandre Dumas’ 1839 play. As the opening artist, whatever nerves Lisle may have been experiencing did not show as she navigated the aria with aplomb, shading the lines with the right amount of vocal chiaroscuro.

“Apri la tua finestra,” a serenade from Mascagni’s “Iris,” was sung superbly by tenor Diego Valdez. If you have not listened to this aria, you’ll hear echoes of “Deh! Vieni alla finestra” from “Don Giovanni.” I thought the piece’s tempo was fast for a serenade, but it didn’t feel like a race to the finish.

Soprano Clara Luz Iranzo displayed enviable top notes as she sang Mario Castelnuovo Tedesco’s “La Ermita de San Simon,” a light-hearted tune about monks who can no longer say amen, only amore. Tedesco is best known for his guitar and film compositions and the influence he had on other film composers, one of whom is the great movie maestro, John Williams.

Two Ildebrando Pizzetti art songs were on the program. “Quel rosignuol che si soave piagne (The nightingale which so gently weeps)” was given a convincing performance by tenor Pedro Sequera, whose large-sized voice and strength in the lower register was impressive. Soprano Kinneret Ely who sang “Levommi il mio pensier in parte ov’era (My thought raised me to a place),” followed Sequera, with Ely’s reflective presence reinforcing the etherealness of the text.

Before Slack finished the evening with “La mamma morta,” tenor Donghyuk Chung produced a memorable dark timbre in the lower range during his performance of “Giulietta son io,” another Zandonai aria, this time from “Giulietta e Romeo.” 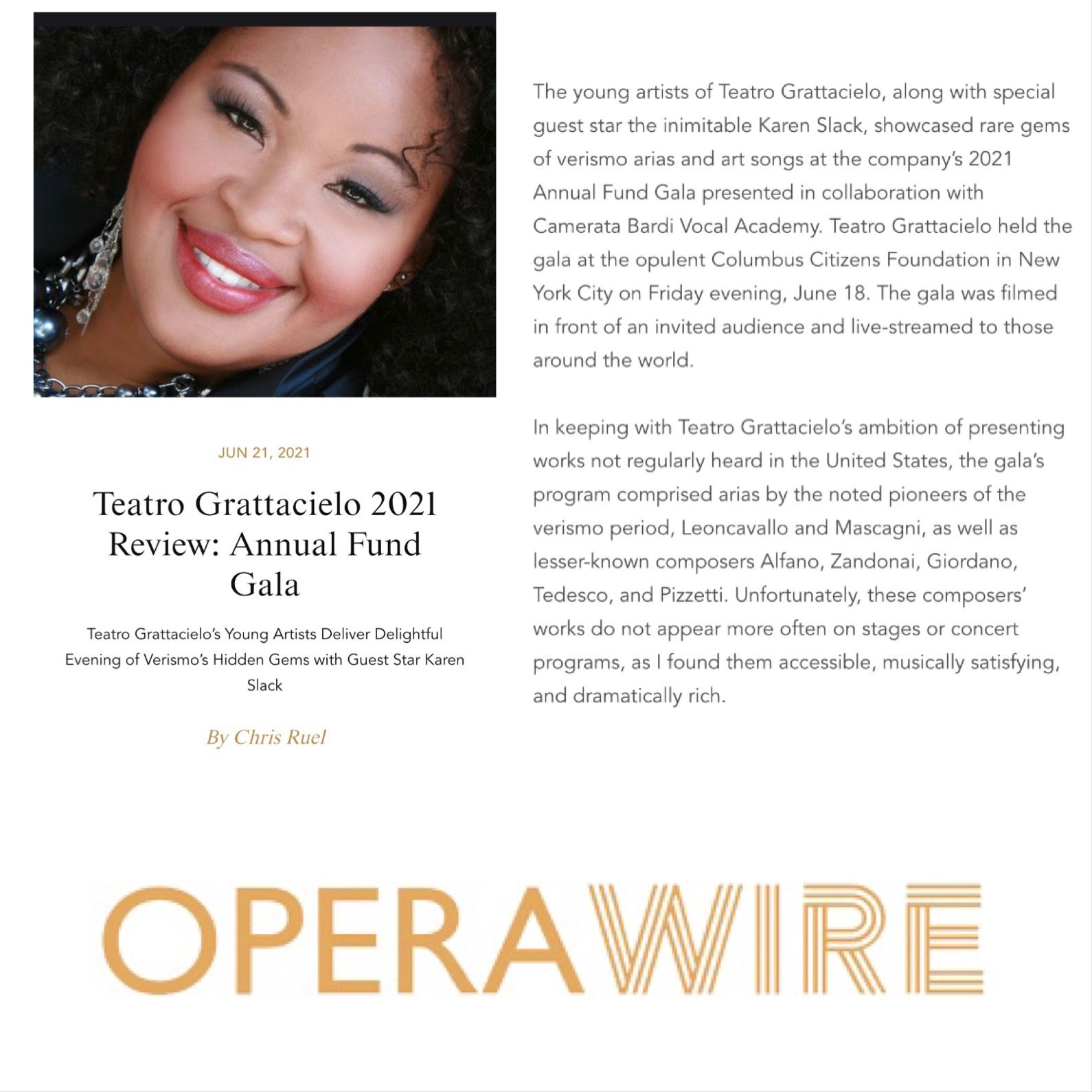 If you have not been following the exploits of Teatro Grattacielo during lockdown, it’s not because they haven’t been exploitatory all over the place.

The little group, devoted for 30 years now to reviving Verismo rarities like Il Piccolo Marat, Siberia, I Cavalieri d’Ekebu and L’Oracolo, has passed the time, its orchestra and chorus sadly in suspense but, in association with the Camerata Bardi, by streaming programs of non-choral excerpts from Boito’s Mefistofele and an entire performance of Giordano’s Fedora, an opera that does without a chorus. A double bill of Spanish operas will be presented on November 13 (De Falla’s L’Amor Brujo and Piazzola’s Oblivion), and Mascagni’s L’Amico Fritz will be given that same weekend in both New York and upstate, in Kingston.

On Friday night, at New York’s Columbus Citizen’s Fund, Grattacielo presented its annual fund gala under the theme “The Forgotten Verismo,” a phrase sure to arouse the interest of those for whom the opera we most want to hear is the one we do not know. The program was performed by 10 student singers, recipients of the Columbus Citizen’s Fund scholarships, and one experienced diva, Karen Slack, and my only regret was its brevity: I wish each singer had had two obscure arias, just to get more of a handle on what each one can do.

In any case, it was a delight to be in the presence of powerhouse voices in the CCF’s elegant turn-of-the-century salon, and as the concert is available, streamed, through next Saturday, you can enjoy them too. https://www.musae.me/teatrograttacielo/experiences/1080/teatro-grattacielo

The composers chosen for the program included most of the usual suspects but also some surprises: From Spyros Samaras, a Corfiote who wrote the Olympic Anthem in 1896 and composed operas in Italian and French as well as in Greek, we had a prayer from Mademoiselle de Belle, and there were settings of Petrarch sonnets by Ildebrando Pizzetti, perhaps the last composer of the Verismo line (has New York ever heard his Assassinio nella cattedrale?)

.The singers were all of them quite young, but years of study already created good habits—and some not so good. Bel canto evenness between registers was a scarce commodity—this is also a problem of far too many mature singers nowadays—there were some truly impressive voices, solidly produced and grandly filling the commodious room.

Kiena Williams sang one of the best-known of the evening’s offerings, “Paolo, datemi pace” from Zandonai’s Francesca da Rimini, with properly high-strung passion.

Pedro Sequera, who sang one of the Pizzetti sonnets, and Donghyuk Chung, who performed Romeo’s aria, “Giulietta son io” from Zandonai’s Giulietta e Romeo, were two strong tenors in the group, and Chung proved capable of an Italianate sob appropriate to Romeo’s arrival in the tomb. (I don’t know this opera—has it ever been sung in New York?—and I’m guessing its placement in the story from Chung’s sob.)

One of the strongest voices of the evening belonged to Hyunsoon Kim, a baritone of exceptionally well-produced tone who, I am told, had never sung in public before. He chose “Zaza, piccolo zingara” for his offering, which was not doing himself favors—the aria from Leoncavallo’s Zaza is a “character” number, affectionate rather than passionate, beloved of baritones who are also actors. Kim’s handsomely stentorian but unvarying sound and look were not ideally suited to it. But there was so much excellent meat in Kim’s voice that one could only be pleased to hear him, and curious where experience and study will lead.

The star of the gala program was Karen Slack, a diva of much experience, who gave us two examples of what proper schooling and stage assurance will produce: “Flammen, Pietà,” the dying prayer of Mascagni’s Lodoletta, bloomed with Slack’s superb top and a melodramatic fade, and “La mamma morta” from Giordano’s Andrea Chénier, in which the bitterness of Maddalena’s unhappy confession evolved, seemingly without effort, into the joyous tones of her discovery of love. The quality of Slack’s superb instrument and skill gave us the drama taking place in the girl’s soul.

The accompanist, as in all the fine programs Teatro Grattacielo has broadcast in the last year, was the company’s resident conductor, Israel Gursky, who was always attentive to his singers’ focus on phrase and text. It’s good to know there are so many young singers around who are eager to study the traditions, and no surprise that they are eager to present themselves after the last dire year. 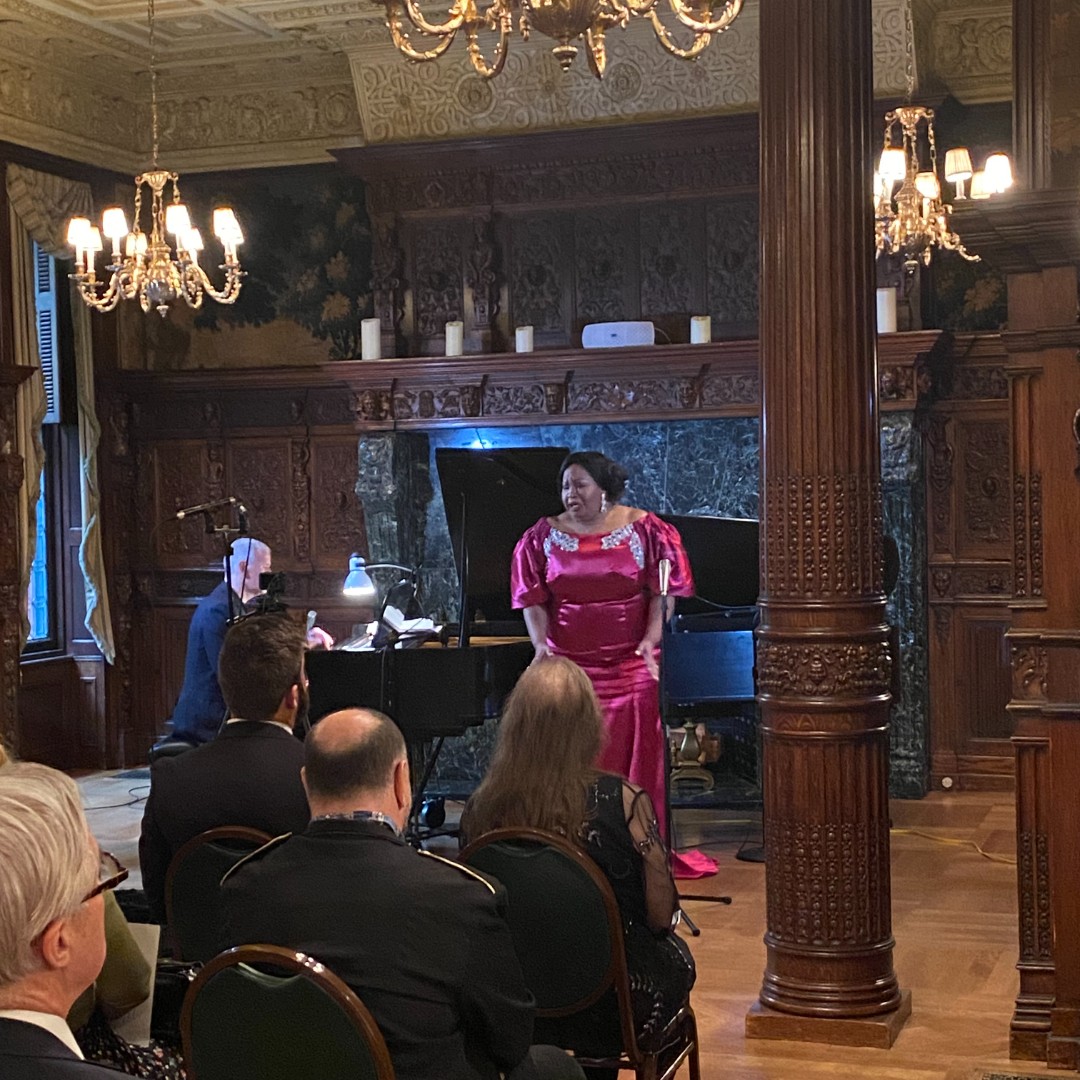 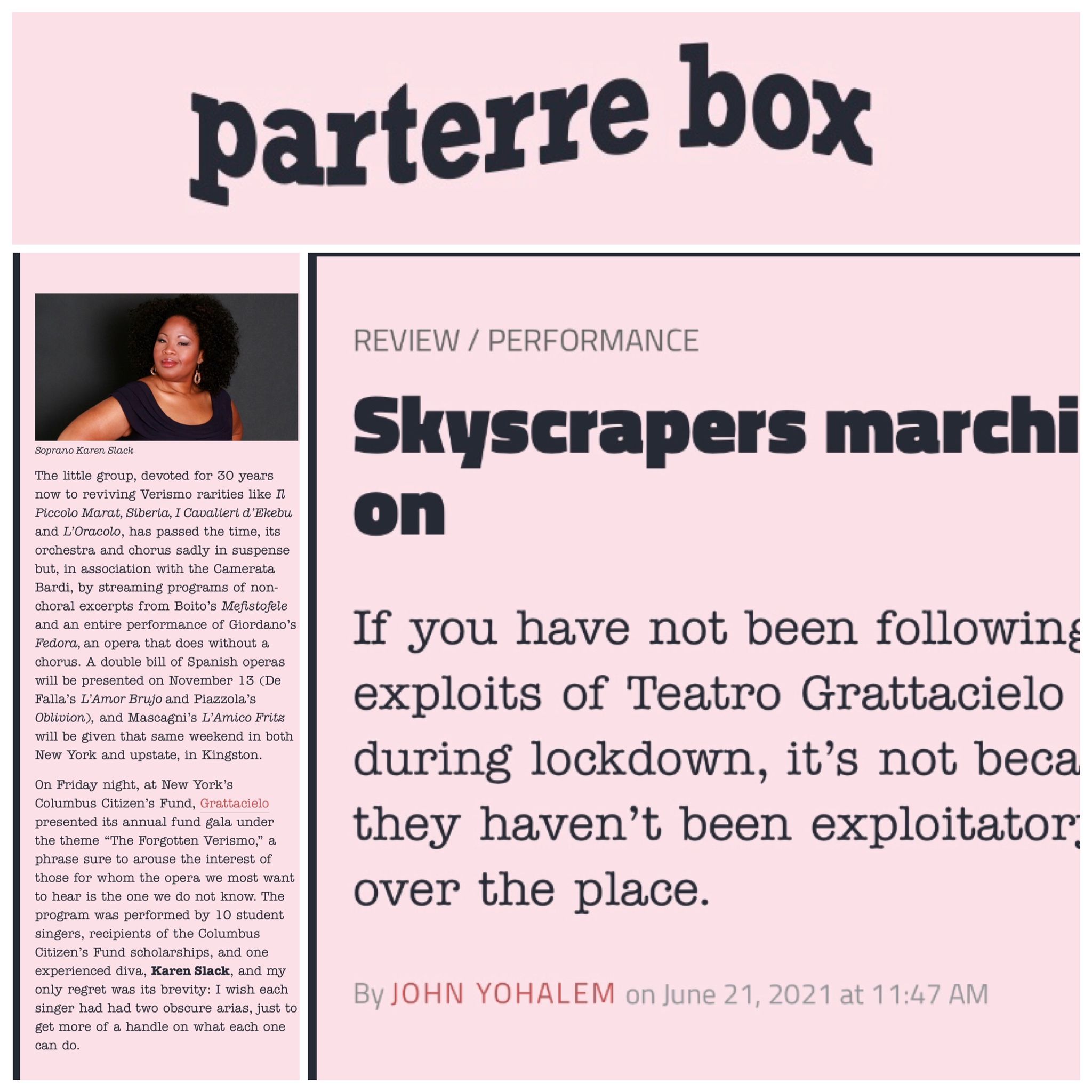